The pandemic has decimated certain market segments. And much of this destruction may be overdone, especially given rapid progress on vaccine and monoclonal antibody treatment options, as well as the extraordinary and continuing monetary and fiscal policy solutions now in place.

The genie is out of the bottle. When the virus is in the rear-view mirror in terms of economic impact, we won’t be putting that genie away either.

One area of the market that stands to benefit is anything that is both expensive and unnecessary in the normal course of existence. Stocks aligned with such products and services have been cast out into the outer darkness in recent months, and there may be nothing but upside ahead.

A perfect example is high-end timepieces. With that in mind, we take a look a few stocks that could be set for rebound action and growth ahead, including: Movado Group, Inc (NYSE:MOV), Fossil Group Inc (NASDAQ:FOSL), Clikia Corp (OTCMKTS:CLKA), and Tiffany & Co. (NYSE:TIF).

Movado Group, Inc (NYSE:MOV) recently announced that it plans to take a charge of $9M to $12M as part of a new restructuring plan aimed at reducing costs in light of the ongoing economic challenges resulting from the pandemic and the resulting impact on the company’s business.

Even in light of this news, MOV hasn’t really done much of anything over the past week, with shares logging no net movement over that period.

Fossil Group Inc (NASDAQ:FOSL) most recently reported global retail comparable sales decreased 14% in FQ1 after trending up 1% prior to the store closings due to COVID-19.

The company discloses that it’s currently negotiating with the majority lender under its term credit agreement. Looking ahead, Fossil expects sales will be under pressure throughout 2020 due to the pandemic.

While this is a clear factor, it has been incorporated into a trading tape characterized by a pretty dominant offer, which hasn’t been the type of action FOSL shareholders really want to see. In total, over the past five days, shares of the stock have dropped by roughly -4% on above average trading volume. All in all, not a particularly friendly tape, but one that may ultimately present some new opportunities.

Fossil Group Inc (NASDAQ:FOSL) managed to rope in revenues totaling $390.7M in overall sales during the company’s most recently reported quarterly financial data — a figure that represents a rate of top line growth of -16%, as compared to year-ago data in comparable terms. In addition, the company is battling some balance sheet hurdles, with cash levels struggling to keep up with current liabilities ($245.5M against $463.2M, respectively).

Clikia Corp (OTCMKTS:CLKA) could be the most interesting name on this list because it’s just starting out as a publicly traded entity, but we are already seeing some very interesting emerging themes here. The company is now all about its Maison Luxe subsidiary, which sells ultra-high-end luxury goods, with a focus right now on watches and jewelry.

Indications at present suggest skyrocketing growth. We are waiting to get confirmation soon when the company is slated to post its first quarter financials that will include the new Maison Luxe business for the first time. But the shareholder they already put out suggest a jolt of topline growth suddenly into the seven figures area (from basically nothing, previously).

Clikia Corp (OTCMKTS:CLKA) just updated its shareholders on a couple fronts, including strong growth in its Duty-Free luxury goods marketplace relationships. The Company’s wholly owned subsidiary, Maison Luxe, has forged relationships with four (4) individual duty-free sellers, which have already made aggregate purchases in excess of $300,000 in custom luxury timepieces from the Company. These are ongoing distribution relationships.

That news was followed by the Company’s update and its near-term plans for further expansion in its wholly owned Maison Luxe subsidiary. This includes plans to expand wholesaling operations, widen margins, build and carry a strategic inventory, and capitalize on existing trends in the rare custom luxury goods marketplace.

“The idea is to grow a brand that sources retail markets with responsibly sourced and priced watches,” remarked Anil Idnani, CEO of Clikia and Founder of Maison Luxe. “That’s typically nearly impossible to find. This is now more the case than ever due to a supply shock as factories shut down or halt production of luxury goods. However, demand hasn’t dropped at all this year despite the health crisis and resulting economic turbulence. The result is rising prices on inventory we have in-house.”

Clikia Corp (OTCMKTS:CLKA) is already publicly talking about being on pace for over $2M in revenues in 2020 with its new business now firing apparently on all cylinders. That suggests upcoming financial filings will represent a qualitative shift from currently available records, which refer to the pre-pivot reality for the company.

Tiffany & Co. (NYSE:TIF) designs, manufactures, and retails jewelry and other items, including being one of the premier sellers of luxury timepieces in the world.

The company sells its products through retail, Internet and catalog, business-to-business, and wholesale distribution channels. As of January 31, 2020, it operated 124 stores in the Americas, 91 stores in the Asia-Pacific, 58 stores in Japan, 48 stores in Europe, and 5 stores in the United Arab Emirates.

Tiffany & Co. (NYSE:TIF) just reported its financial results for the three months ended April 30, 2020. Worldwide net sales as reported and on a constant-exchange-rate basis that excludes the effect of translating foreign-currency-denominated sales into U.S. dollars were below the prior year primarily as a result of the temporary closures of a substantial number of the Company’s stores around the world due to the COVID-19 pandemic. Unlike calendar year-end companies, the Company’s first quarter began February 1, meaning that the COVID-19 pandemic affected its entire quarter. The significant decline in net sales resulted in a net loss in the quarter.

It will be interesting to see if the stock can break out of its recent sideways action. Over the past week, the stock is net flat, and looking for something new to spark things. TIF shares have been relatively flat over the past month of action, with very little net movement during that period.

Tiffany & Co. (NYSE:TIF) generated sales of $555.5M, according to information released in the company’s most recent quarterly financial report. That adds up to a sequential quarter-over-quarter growth rate of -59.1% on the top line. In addition, the company is battling some balance sheet hurdles, with cash levels struggling to keep up with current liabilities ($1.1B against $1.3B, respectively). 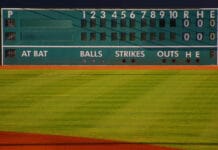